A tenacious campaigner for land rights and social justice. 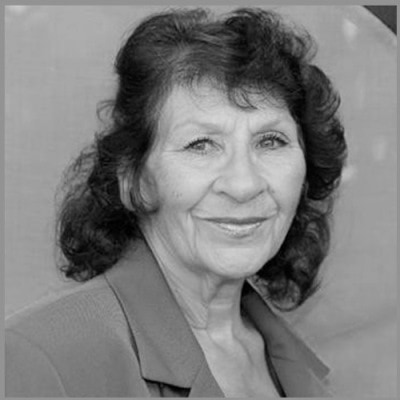 Aunty Georgina Dulcie Lovett Williams, a Gunditjmara woman, has dedicated her life to the welfare of her people, fighting for land rights and for social justice.

Born in Carlton, Melbourne, in January 1943, Georgina’s family home was in Fitzroy. She was the youngest of the 5 children of Gertrude Christina Lovett (known as Gertie) and Alfred (Tom) Egan, both Gunditjmara people. Her siblings are Victor, Dorothy, Thomas and Edward. Georgina’s father, Tom, was recognised as one of the first Aboriginal men to play football at VFL (now AFL) level for Carlton, Richmond and North Melbourne.

Most of Georgina’s life was spent in Fitzroy or surrounding areas, but her mother, Gertie, would constantly pack up the family, for various reasons, and return to her and Tom’s traditional country. Georgina spent extended periods of time in the Lake Condah-Portland area where she attended school, got to know her relatives and learned Aboriginal customs and stories. This ensured that she retained a sense of belonging and understanding of her traditional country which, she recalls, ‘was always on Mum’s agenda’.

Georgina’s grandfather, Ebenezer James Lovett (known as Ebon) came to Melbourne from the Western Districts in the mid-1930s to agitate for his people, bringing his daughter Gertie and her baby son, Victor, with him. Ebon, a Gunditjmara leader, was dissatisfied with the general treatment of Aboriginal people. While five of Ebon’s younger brothers served in World War I and some also in World War II, for Ebon the war was ‘right here’ in Australia, not on foreign shores.

Ebon was one of the founders of the Australian Aborigines League in Melbourne. He was also a member of the Communist Party and he always stated clearly that within the Communist Party he was treated as an equal and given a voice. Tragically he was run down by a car in Fitzroy and died on his way to St Vincent’s hospital in 1941.

From a young age Georgina was aware of the struggles of her people and her family’s comparative poverty, but looks back on her young life without bitterness. Her happy childhood was wholly due to the efforts of her gentle and kind mother who was not only a great protector, but also an excellent cook. In later life, Georgina realised that Gertie often moved houses to make it difficult for welfare authorities to track them down. Gertie passed away when Georgina was just 15 years old and her father, Tom, followed soon after. The family always stayed together owing to the efforts of Georgina’s eldest brother Victor and sister Dorothy.

As a teenager Georgina was keen on sport – her brother Victor was a professional boxer and she too loved to get the gloves on and have a spar in the gym. After leaving school she worked in various jobs in shops and factories in inner Melbourne. At the age of 20, Georgina married Jack Williams and the couple had two children, Shelley and John.

Roles with many Aboriginal welfare organisations

Georgina enjoyed being a full-time mother and it was not until her children were at school that she chose to look at career options. With the encouragement of the late Dr Alf Bamblett, she studied social work and gained a degree.

Work on the return of traditional lands

In the 1980s Georgina spearheaded negotiations between the Gunditjmara and State and Federal governments for the return of traditional lands in the Lake Condah area. For Georgina this meant dealing with competing tribal interests and spending many hours on the road. In 1987, after lengthy negotiations, the claim was successful. It resulted in 53 hectares of land being vested in the Kerrup-Jmara Elders Aboriginal Corporation (now administered by the Gunditj Mirring Traditional Owners Aboriginal Cooperative). It was a small area of land but a big victory for the Gunditjmara people, opening the doors for many other claims. Georgina then went on to work for the re-flooding of Lake Condah to restore the original wetlands; a project that was brought to fruition by fellow tribal member, Damien Bell.

Achieving gains for her people

Georgina was also on the committee that established the Minajalku Centre, a former church and house in Thornbury. ‘It was a big space, but they had nothing’ recalls Georgina who could see the potential for a community meeting place. The centre is now run under the auspices of VAHS and used for counselling, drug rehabilitation, art therapy, language classes and cultural events.

Georgina has been an Elder representative on the Children’s Koori Court since it began in 2005 and recently began doing the same work with the Magistrates’ Koori Court. She also sits on the Elders council at Deakin University which is an advisory body to the University’s Institute of Koorie Education.

Georgina is currently the chairperson of the Weeroona Aboriginal Cemetery in Greenvale, having originally served on its Trust. In 2010 Georgina was engaged in the repatriation of Aboriginal remains from Melbourne Museum to the Cemetery. Her work, which includes dealing with State government departments, the local council and stakeholder groups, is undertaken on a purely voluntary basis. She has successfully campaigned for new facilities, including a chapel, while maintaining and improving the grounds. She also negotiated with Corrections Victoria for the cemetery to be a work site for those on community correction orders. Aunty Georgina has an indomitable spirit and continues to achieve gains for her people through determination and persistence.