An honourable warrior of the Aboriginal rights movement 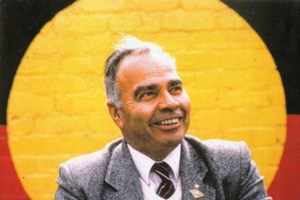 John Stewart Murray was a Wamba Wamba Elder, respected for his unwavering commitment to the advancement of his people. He could always be counted on to speak 'as straight as a spear' — appropriate given that his tribal name, Werremander, means 'whistling spear'.

Born at Lake Boga, near Swan Hill, in 1926, Stewart had traditional connections to the Baraparapa, Yorta Yorta, Dhudhuroa and Wiradjuri peoples.

At age 13, Stewart travelled to Melbourne to live with an aunt. He found a friend in Pastor Doug Nicholls, who took him under his wing. In an early foray into community service, he assisted Pastor Doug in finding employment for young Aboriginal men who arrived in the city.

Stewart enlisted in the Australian Imperial Force in 1941. He was only 17 at the time and had to lie about his age. Later, he would recall how, when in uniform, he was treated like any other man, and note the surprise expressed by other soldiers upon learning that, back home in the country he was fighting for, he was not even permitted to drink in the hotels. The camaraderie of the Force was at odds with the racism he experienced at other times in his life.

He served for five years in New Guinea and the South West Pacific and at the end of the Second World War spent several months in Japan as a member of the occupation army. His mother's poor health forced him to apply for discharge. He returned to Balranald, New South Wales, to be with her.

Despite being a decorated serviceman, Stewart was denied the Soldier Settlement Land grant typically afforded soldiers. It was a blunt reminder of how little had changed in his time away.

Stewart married Nora Nicholls, the daughter of Pastor Doug. Together they moved back to his beloved Wamba Wamba country to heal from the trauma of war and start a family. Stewart's connection to his country was strong, a trait he passed down to his children and grandchildren.

The family was forced to return to Melbourne following a severe flood. Stewart once again worked under the guidance of Pastor Doug. He became a founding member of the Aborigines Advancement League (AAL). Stewart maintained a lifelong connection to the AAL and at different times was a Welfare Officer, a Liaison Officer and served as its Director.

Stewart became one of the new generation of politically mobilised Aboriginal people, who gathered together in Melbourne, not only to work hard and support the welfare needs of their people, but also fight for changes that aimed to deliver equality, justice and land rights.

A man of integrity, Stewart was unafraid to make a stand when it counted. In 1968, shortly after he was elected to an advisory council for the newly formed Victorian Ministry of Aboriginal Affairs, he boldly resigned in protest over the undemocratic appointment of some members.

He was directly involved in establishing a number of organisations that met the needs of Aboriginal people. One such organisation was the Victorian Aboriginal Legal Service, started in 1973 in response to the disproportionately high number of Aboriginal and Torres Strait Islander people passing through the criminal justice system. Another to benefit from Stewart's involvement was the Aboriginal Funeral Service, which commenced operation in 1984. It was the first of its kind; a culturally sensitive operation with a particular focus on assisting families to return their loved ones back to their traditional country.

Stewart was a vocal campaigner for the establishment of a state-wide Aboriginal housing steering committee, which subsequently led to the creation of the Aboriginal Housing Board of Victoria. He was a member of the first Aboriginal Police Liaison committee established in Melbourne in the 1970s.

Stewart brought a cool head and strong will to the positions he held. These included regional manager of the federally funded Aboriginal Hostels Ltd; administrative officer for the Dandenong Aboriginal Co-operative; and member of the Federal Council for the Advancement of Aborigines and Torres Strait Islanders (FCAATSI). He often addressed the media on a range of issues, becoming known as a spokesman for the community. His letters to the editor of the major newspapers around the country were prolific.

Stewart was appointed chairperson of the Victorian Aboriginal Lands Council, in recognition of his work around land rights. He had been involved in the battle for land at both the Lake Tyers and Framlingham reserves.

Stewart was made a Justice of the Peace in 1982 and in 1984 was awarded a Medal of the Order of Australia. The National Aborigines and Islanders Day Observance Committee (NAIDOC) named him Victorian of the Year in 1987.

Stewart shared his voice with those who had none and was admired by people from all walks of life and positions in society. The courage and determination he displayed during the war was skilfully redeployed on the home front, as he worked to ensure future generations need not fight the same battles he himself had.