Dedicated advocate with a lifelong commitment to self-determination and Aboriginal health and well-being, education, housing and justice. 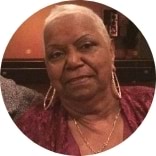 A strong woman with a kind heart

Aunty Marion Pearce was a proud Gunai and Monaro woman born on 23 October 1948 at Orbost who lived most of her life in Bairnsdale. Marion’s parents were Albert Solomon and Edna Solomon (nee Gaye) and she was one of 8 children. Marion died on 1 July 2016.

In 1965 she married Robert ‘Jumbo’ Pearce (Victorian Aboriginal Honour Roll, 2014). After briefly living in Robinvale, in 1966 Marion and Jumbo returned to Bairnsdale where they raised their 4 daughters.

Marion only attended school for a short time. Following a school visit by government welfare officers, Marion's father decided to follow seasonal fruit picking, not wanting his children to become Stolen Generations statistics. This meant the family constantly moved and Marion did not have the opportunity to learn to read or write. Marion developed an amazing ability to retain information that was passed on to her orally and visually. She obtained her driving licence and navigated driving in inner Melbourne by memorising landmarks and street patterns. She also made sure her children and her foster children were well educated.

Marion’s strength and determination were borne out of her struggles with racism, and not being accorded respect and equality. She ensured her family stayed strong, connected to Country, that her daughters knew of her experiences and the fundamental importance of quality health, education, housing and justice to make Aboriginal people’s lives better. Marion taught her family to always stand up, speak their truth and express how they felt. She was a strong woman with a kind heart. She was always looking to achieve the best outcomes for her community and always shared her culture generously and freely.

Marion’s experiences of racism sharpened her resolve in early adulthood. An example included going to the hospital’s maternal health clinic early in the morning with her new baby to be first in line, only to have to wait all day and be last seen. Experiences like this compelled her to advocate assertively for health services designed and run by community.

In the late 1960s and into the 1970s, Marion and Jumbo joined other local leaders, including Marion’s mentor, Aunty Nessie Skuta, who worked to advocate for community equity and better services. Marion mentored and educated Aboriginal and non-Aboriginal community members within the health and justice sectors, including within government, to ensure community members were respected and given services appropriate to their circumstances (for example, family violence aid). She ensured that providers were made accountable for their actions.

Due to continuing discrimination experienced by community members needing to use health services, Marion was part of a woman’s group of some 67 proud, strong and resilient women along with some men who set the foundations in 1975 for what would become the Gippsland & East Gippsland Aboriginal Co-operative (GEGAC).

Marion sat on GEGAC’s Board for over 30 years. In GEGAC’s early years Marion was a dedicated Aboriginal Health Worker/Diabetes Educator, and in later years she became the Manager of GEGAC’s Medical Service. The Pearce family, who are still deeply involved in GEGAC today, are proud of all Marion achieved for GEGAC and how it has grown into a multi-service provider including a  medical centre, boorai centre supporting homebased learning, playgroup, kindergarten, youth and family service, homeless shelter, drug and alcohol centre, youth hostel, women’s refuge, and provider of Elders’ services.

Marion, alongside others, was a founder of the Centre of Excellence for Aboriginal Health East Gippsland (CEAHEG), established in 2008 to support young Aboriginal people to take up pathways to become health professionals. A proud milestone was reached in 2013 when the first Gunai/Kurnai woman studying medicine graduated as a doctor.

Marion was also on the Board of the Victorian Aboriginal Community Controlled Health Organisation (VACCHO), and her significant contributions in health across Gippsland and Victoria also extended to the National Aboriginal Community Controlled Health Organisation (NACCHO). As part of her commitment to education, she was a long-time member of the Local Aboriginal Education Consultative Group for the Victorian Aboriginal Education Association Incorporated (VAEAI).

Marion had a strong spiritual life. She was a very committed member of the Aboriginal Catholic Ministry for Victoria, educating the Church about reconciliation, especially by incorporating important Aboriginal cultural artifacts and symbols, including the message stick into Aboriginal Mass. Marion crafted a message stick for every Catholic Church in Victoria. She also crafted coolamons used in church for baptism and funeral services, encouraged the burning of gum leaves in church to symbolise respect to Elders and Ancestors, and crafted a stole of Aboriginal symbols that included bird totems for the Bairnsdale priest. She was one of the Diocese of Sale representatives who attended Ministry meetings in Melbourne.

Marion was well-known for her leadership and personal presentation. Above all, she was known for her voice. She was a powerful woman of serious intent who commanded respect and was always up for the robust conversations that were needed. Marion was educated in another way: she learnt by looking, listening, understanding, and then speaking her truth. She was also known for her directness and honesty. She strongly encouraged other community members to have voice, speak their truth, and to always claim their self-determination, not be repressed by non-Aboriginal perspectives and practices.

She loved to help whether physically, emotionally or spiritually. Marion was very connected to culture in a healing way and was renowned for this. She was well-known as a go-to person who loved to be of service, applying the bush medicine and spiritual healing traditions inherited from her family line. Where needed by family and other community members, she applied her traditional health and healing practices, including to complement modern medical treatments. In keeping with the cultural tradition for these healing practices, she has passed this special knowledge onto one grandchild.

Marion is remembered as a most dedicated advocate for Aboriginal rights and services. She is recognised for her lifelong commitment to self-determination and Aboriginal health and wellbeing, education, housing and justice.