A passionate advocate for better education. 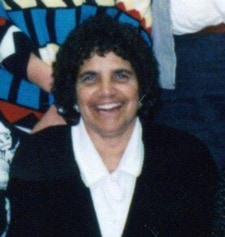 Aunty Mary Atkinson was a Wiradjuri and Bangerang Elder, whose tenacity and integrity made her an inspirational leader. She dedicated her life to the pursuit of equality for Aboriginal people, particularly in the area of education, which she saw as fundamental to changing lives for the better.

Born in Condobolin, New South Wales, in 1937, Mary was the daughter of Alf and Lulla Bamblett — one of their 14 children. She grew up in Narrandera and Leeton and left school at a young age to find work and help support her family.

Even as a teenager, Mary was committed to fighting the disadvantage experienced by her people. She was only 17 years old when she and her sisters organised a concert to raise money for Aboriginal children attending school in Leeton.

At 19 years of age, Mary married Kevin Atkinson, with whom she would share her life for 48 years. The couple had five children and fostered two more. Inspired by the work of their parents, all her children went on to be involved in Aboriginal affairs.

Mary and her husband lived at Cummeragunja between 1965 and 1977. During this time they campaigned to have land returned to the residents of the old mission. She was an active regional member of the Federal Council for the Advancement of Aborigines and Torres Strait Islanders (FCAATSI) and lobbied for the 1967 referendum that saw Indigenous Australians counted in the national census for the first time. Mary also helped found the Cummeragunja Day Care Centre in 1968.

After moving to Shepparton, Mary continued to involve herself in Aboriginal affairs locally and further afield. Recruited as a hospital liaison officer at the Goulburn Valley Base Hospital, Mary contributed to a review of mortality rates among Aboriginal children in Shepparton. The study subsequently led to the creation of a specialised ante-natal care program — a forerunner to the child and maternal health programs that exist today.

Mary believed all Aboriginal children had the right to a quality education. She became one of the first regional members of the Victorian Aboriginal Education Consultative Group in 1978, and founded a local branch the same year. The group delivered programs that improved educational outcomes across the Goulburn Valley region.

Throughout the 1980s and early 1990s, Mary helped establish a variety of programs and services to support Aboriginal people from the earliest stages of childhood development, right through to higher education. These include the Lidje Child Care Centre, Minimbah Aboriginal Adult Education Program, Manega Aboriginal School Annexe, Batdja Aboriginal Pre-School, and the Koorie Intern Teacher Program.

Mary was among a group of respected Elders whose experience and advice was crucial to the establishment of the Institute of Koorie Education at Deakin University in 1986. She played a key role in shaping the content and direction of its higher education programs and was chair of the Institute's board from 1988 to 2000.

In 1990, Mary was elected President of the Victorian Aboriginal Education Association Incorporated (VAEAI), a position she held until her retirement in 1999. Among her achievements in the role was a formal partnership between the Aboriginal community and the Victorian Department of Education, to ensure collaboration and consultation in all education-related policy. The agreement set the standard for similar partnerships between government agencies and the community.

Mary was also involved with a number of key community-run organisations, including the Rumbalara Aboriginal Co-operative, the Aboriginal and Torres Strait Islander Commission Binjirru Regional Council, the Victorian Aboriginal Legal Service and Victorian Aboriginal Community Services Association Limited (VACSAL). She was a speaker and mentor for the inaugural VACSAL Koorie Community Leadership Program in the last year of her life.

It is testament to her work in education that three scholarships have been named in Mary's honour; the University of Ballarat, Deakin University and an award for Koorie Education Training presented at VAEAI's Annual Wurreker Awards.

In 2000, Mary and her husband returned to Cummeragunja to live. That same year she received an honorary doctorate from Ballarat University, in recognition of her contribution to Indigenous education. She was named Indigenous Elder of the Year and was elected a patron of the NAIDOC program in Victoria. In 2001, she was inducted to the Victorian Honour Roll for Women. Although illness forced her to reduce her commitments, she continued to undertake significant work in the community until she passed away in 2004.

Aunty Mary was proud of her family and her heritage. Her tireless and passionate work was done in the hope that future generations would not have to experience the struggles in life that she herself had. To that end, she paved a way to a brighter future for many.