The brave men of the Gunditjmara garrison. 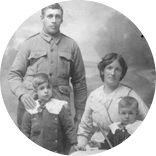 The Lovett brothers occupy a special place in the history, not just of Australia, but also of the Commonwealth. Four of the brothers served in both World War One (WWI) and World War Two (WWII). Their unique family story has come to symbolise the contribution that thousands of Aboriginal men and women have made to the defence of Australia, even at a time when citizenship rights were denied to them at home.

Alfred, Leonard, Frederick, Edward and Herbert were the sons of James Lovett, an Aboriginal man from South Australia, and Hannah (née McDonald), a descendant of the Kerrup-Jmara clan of the Gunditjmara nation in Western Victoria. As a child, Hannah, her mother, and her brother, were among the first Aboriginal people at Lake Condah Mission after it was established in 1862. Hannah went on to have 13 children, among them five boys who would enlist to fight in WWI.

Against the odds, all five brothers returned home safely. Although the Great War had been an equaliser of men — racism had no place in the trenches — little had changed in civilian life. After the closure of Lake Condah Mission in 1919 the Lovett family made a living in the surrounding district.

Four of the five original brothers re-enlisted during WWII, however due to their age they served within Australia. Their younger brother, Samuel, and several other family members also served in Australia and overseas. All returned unharmed, as has every member of the Lovett family who has served in the Australian Armed Forces — 21 men and women in total.

As a result of the heroic service of the Lovett brothers and their post-war activism in support of the service of Indigenous soldiers, Aboriginal service men and women today are given the support and recognition they deserve.

Nigel Steel, a historian at the Imperial War Museum in London, once stated that he knew of no other record of military service by a single family that matched that of the Lovett family. Fittingly, the building that contains the Department of Veteran's Affairs in Canberra was renamed Lovett Tower in honour of their distinguished military contribution.

The Lovett brothers were descended from a long line of heroic warriors; the 'Fighting Gunditjmara' people who saw conflict from the earliest days of European settlement. While there is pain in these stories, they also offer lessons for us all: in courage, resilience and hope. Private Alfred Lovett enlisted on 29 July 1915, just before his 36th birthday. After training in the Middle East from October 1915 to March 1916, he fought with the 26th Battalion. He later transferred to the 12th Battalion.

Alfred participated in the battle of the Somme in France, including battles for Poziéres and Mouquet Farm. He returned to Australia in March 1918 and was discharged in June that same year. He was awarded three service medals.

As a civilian, Alfred worked as a horse breaker and trainer near Casterton. He was also a well-known jockey. He married Sarah Spring, from Hamilton, with whom he had two sons. They ran a farm in the region. As the eldest brother, Alfred was ineligible to enlist in WWII due to his age.

Leonard, commonly known as Charlie, enlisted on 27 May 1916 and served as a Private in the 39th Battalion of the 3rd Division. He fought on the Western Front, including significant campaigns at Passchendaele in 1917 and Amiens in 1918. He returned to Australia in 1919 and was awarded two service medals.

Many people were surprised to discover that Leonard spoke fluent German. It is thought that he picked up the language while working around Tarrington, near Hamilton, which was settled by German-speaking pioneers.

Among his occupations, Leonard worked as a drover. He married Elsie Maude Clark, with whom he had seven children. Leonard re-enlisted during WWII. Between 1941–42, he was stationed in Australia as a Private with the 3rd Garrison Battalion. His daughter, Alice, served with the Women's Auxiliary Australian Air Force in WWII and his son, also named Leonard Charles, served in the Korean War. Hiis grandson, Mervyn, served in the Vietnam War. Frederick enlisted on 13 May 1917. He was a Private in the 29th Reinforcements of the 4th Light Horse Regiment and fought in Palestine. He was discharged on 15 June 1919 and awarded two service medals.

He married Mary Murray Rose and had 11 children. His daughter, Laura Bell, is also a 2013 inductee to the Victorian Indigenous Honour Roll. Frederick worked as a labourer for many years.

Frederick re-enlisted in March 1942. He was a Corporal and served in the Australian Army Catering Corps as a cook. He was discharged from the army in July 1947 at the age of 60. Frederick's grandson, Sergeant Ricky Morris, has recently served in the army with the International Force for East Timor and in Afghanistan.

A single labourer when he joined, Edward married Rose Ann Heron before he shipped out in 1915. The couple had two children, a son and daughter. They ran a billiards hall and pub in Hamilton for a time. Edward also worked as a labourer.

Edward re-enlisted in 1940 and served as a Corporal at the number 12 Garrison Battalion until 1943. Edward's daughter, Sarah Pearl, also served in the Australian Women's Army Service during WWII. Herbert, the youngest of the brothers to serve in WWI, enlisted in 1917. As he was only 19 years old, his parents were required to give special permission for him to join. He fought on the Western Front as a Private in the 15th Machine Gun Company and participated in the attack that broke the Hindenburg Line in 1918, the last and strongest of the German army's defence. He was discharged in July 1919 and was awarded two medals for his service.

Herbert married Emma Foster from Harrow in 1926 and went on to have six children. His daughter, Iris Lovett Gardiner, was inducted to the Victorian Indigenous Honour Roll in 2012. Herbert was musically gifted and played the organ at Lake Condah's church. He was also the choirmaster and worked in the timber industry.

In August 1940, Herbert re-enlisted as a Private. He served as a cook in the Australian Army Canteen Corps and was discharged in October 1945..