A warrior of the Aboriginal women's movement. 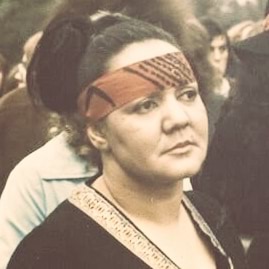 Born in 1939 at Cummeragunja, just across the Murray River in New South Wales, Margaret was the daughter of Geraldine Briggs (née Clements) and Selwyn Briggs. She grew up in Shepparton with her 7 sisters and one brother. Both parents were heavily involved in the Aboriginal rights movement. Her mother, in particular, dedicated her life to improving the lives of others and was an influential role model to Margaret. Geraldine Briggs was an inaugural inductee to the Victorian Indigenous Honour Roll in 2011.

From an early age, Margaret would visit Aboriginal families with her mother and hear their stories of struggle. She also inherited her mother's love of the Yorta Yorta dialect and had a profound connection to her grandmother Theresa Clement's country on Ulupna Island, which is bounded by the Murray River and Ulupna Creek in Barmah National Park. There was a sense of inevitability to Margaret's future as a political activist – her relatives also included Aboriginal luminaries such as Margaret Tucker MBE(C), Jack Patten and Pastor Sir Doug Nicholls KCVO OBE. The family home hosted meetings of the Aborigines Advancement League and Margaret assisted with its fundraising activities.

At the beginning of the 1960s, Margaret became involved with the Federal Council of Aboriginal and Torres Strait Islanders (FCAATSI), campaigning alongside her mother and sister Hyllus Maris on issues such as equal wages and land rights. Their efforts contributed to the success of the 1967 Referendum, which amended the constitution to allow Aboriginal people to be counted in the census and for the Commonwealth Government to create laws for them. Although historically significant, Margaret always viewed the referendum as just one small step in a long journey.

The FCAATSI conferences brought together Aboriginal women in an exchange of ideas. As a result the National Council of Aboriginal and Islander Women formed in 1972. Margaret was a member of the executive, serving as secretary for 10 years. The council lobbied government on a range of issues affecting Aboriginal people, from health to housing, and was a staunch supporter of the Aboriginal tent embassy in Canberra. The women travelled Australia attending meetings and were resourceful and independent – if their car ran out of petrol on a long distance trip they simply got out and pushed. The overwhelming feeling among the communities they visited was that with these women around, things were going to be okay.

Though Margaret received no formal high school education, with her gumption and inquisitive mind she could more than hold her own in meetings with senior figures across government and the private sector. She and other hardworking Aboriginal women were at the forefront of a push for self-determination in Victoria. They saw how mainstream services were failing their people and established community-run, culturally appropriate alternatives. Margaret was a founding member of the Victorian Aboriginal Health Service in 1972 and the Victorian Aboriginal Legal Service in 1973.

After marrying David Wirrpanda, a Yolngu Djapu man from north east Arnhem Land, Margaret and her children divided their time between the Northern Territory and Victoria. She learnt to speak fluent Gumatji, a local dialect, and connected with the Elders, who added to her already encyclopaedic knowledge of Aboriginal culture. Back in Victoria, Margaret was a proud supporter of Worawa Aboriginal College, which she helped her sister Hyllus to establish in 1983. She played an important role in running the school for many years. Margaret believed in the endless potential of young Aboriginal people and liked to remind them that it was character and not colour that counted.

A fervent campaigner for Aboriginal land rights, Margaret was integral to an early claim lodged by the Yorta Yorta Tribal Council in 1984 for traditional ownership over Barmah Forest. She went on to become a plaintiff in the long-fought Yorta Yorta native title claim heard by the Federal Court, attending every proceeding and appeal between 1996 and 2002. From 2004, after the Victorian Government signed a ground-breaking co-operative land management agreement with the Yorta Yorta people, Margaret sat on the committee that handled water issues. She was devoted to her mother and grandmother's country her entire life.

In her early 60s, Margaret suffered a heart attack, but continued to participate regularly in community activities, whether leading cultural seminars, teaching language or speaking at special events. In 2003, Margaret was inducted to the Victorian Honour Roll of Women. In keeping with family tradition, Margaret's children are active within the Aboriginal community. Margaret passed away in 2013. She is remembered for her keen intuition, great strength and as the custodian of her family's cultural heritage.

Aunty Margaret always held her hand out to anyone who needed help in standing up for themselves. She was not just a great warrior but also an authoritative leader whose voice still speaks for her people today.