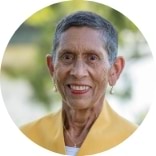 Sylvia, known as Fay, was born at Swan Hill and is a Boon Wurrung Elder of the Yalukut Weelum of the Boon Wurrung, Wamba Wamba and Wergiai clans.

Fay lived at Dundonnell in western Victoria with her family where she went to primary school.  After she finished primary school, she travelled one and a half hours each day to Derrinallum High School on an old bus that often broke down. These were many happy years where lifelong friendships were made.

Fay is a First Nations’ community leader and Koori Court Elder. She is a Boon Wurrung and Wemba Wemba language specialist and works as a prison educator in First Nation languages and as a creative language revival consultant and collaborator.

Fay has served the Victorian community for over 40 years. After she left school she worked as a nanny before pursuing her passion from childhood, nursing. Fay started her nursing journey at Fairfield Hospital, then worked as a nurse in Geelong for over 30 years.

As an Elder and Traditional Owner of Boon Wurrung Country, Fay is working with her own Boon Wurrung language, recording and putting language into a database for present and future generations.

Fay presents language-related workshops to community members who are reclaiming their languages, as well as at universities and technical and further education (TAFE) institutions that are interested in understanding the many and challenging aspects of language reclamation.

Fay provides cultural and curriculum guidance to students and teachers at all levels within the Victorian education system. She goes to schools to educate students about language and culture, and to teach language. She reaches out to schools voluntarily and generously shares stories and language that have enriched young students and encouraged them to share what she has taught them in the wider community. She works with students in her own free time, assisting students to make language resource kits for classrooms, with many resources based on learning the Boon Wurrung language which they have been learning from her.

She is passionate about sharing her culture, stories and language with everyone so that all Victorians will have the opportunity to know and share in the history of our country and Victoria.

Fay’s first children’s book, Nganga: Aboriginal and Torres Strait Islander Words and Phrases, co-authored with Sue Lawson, was published in 2018. Nganga (ng gar na): to see and understand. Aboriginal and Torres Strait Islander words have become part of everyday vocabulary, yet people may not know their true meaning or where the words come from. The book covers frequently used words and terms such as Aunty, Uncle, Sorry Business, deadly, women’s business, marngrook, Dreamtime, Elders and songlines.

In May 2020, Fay and Sue Lawson published Respect in a series called Our Place, a compilation of four children’s picture books that welcome and introduce children to important elements of Aboriginal and Torres Strait Islander culture. Respect whispers a soft and heartfelt message about the basic cultural principle that informs all First Nations throughout Australia. Respect is about a way of life that is older than ﬂickering stars, about stories that shimmer through tall grasses, and redgum leaves that tumble to a parched and red earth. It teaches children the importance of family who show the way and how we need to listen, learn and share.

The Boon Wurrung language and culture is a unique part of Victoria, important to Aboriginal and non-Aboriginal Australians. Through the extensive body of her work and contributions, Fay is leaving a powerful language legacy for current and future generations.